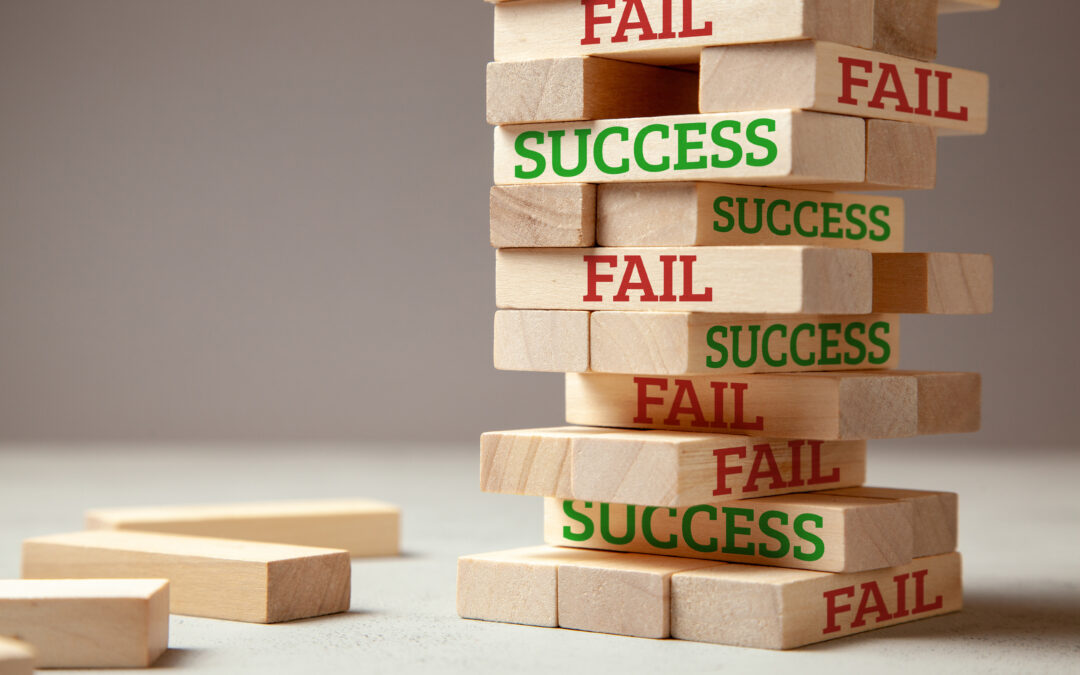 Why Should we Resolve to Succeed at Failing?

Every new year, many of us set lofty goals and make resolutions about building healthy habits, becoming more productive, or learning a new skill. Unfortunately, many of these resolutions will quickly fall by the wayside— or may never begin at all. Most people don’t start the new year by resolving to fail, but maybe we should!

To successfully build new habits and reach ambitious goals, you must first get comfortable with failure. Anytime we strive to do something new, we inevitably face difficulty. Imagine you resolve to run a marathon in the year to come. You buy the perfect running shoes, workout clothes, and a wearable fitness tracker. Then, on your first day of running, you can’t get through the first mile without stopping. Rationally, you understand that training takes time, but we often become frustrated and give up. However, if we embrace the difficulty and expect to fail along the way, we can build the resilience needed to keep trying.

A New Approach to Failing

As leaders, we can benefit from learning to succeed at failing. More importantly, we can develop resilience in our teams by framing failures as an opportunity for growth. Try a new way of examining what went wrong to get better at failing. For years, the standard approach to a business failure has been to conduct a post-mortem that ultimately assigns blame and comes up with a superficial lesson, such as “standard procedures were not followed” or “deadlines were consistently missed.”

Instead, try taking a curious approach to failure. Ask what you can learn from the outcome and what might work better next time. Instead of getting stuck in negative feelings about not reaching a goal, focus on what was accomplished and what opportunities have been created in the process. For example, when your first day of running is not quite marathon-worthy, remember that you just took the first step in the process. Today’s short run has taught you that you will need to build more endurance and that only happens over time. Then, ask yourself how far you can try to run the next day and the day after that.

Succeed at Failing by Immunizing Yourself Against Disappointments

Part of succeeding at failing is learning to deal with the feelings that come with disappointment. Entrepreneur and author of “Rejection Proof: How I Beat Fear and Became Invincible Through 100 Days of Rejection,” Jia Jiang, struggled with a fear of rejection that was holding him back in his career and decided to practice being rejected.

For 100 days, he actively sought out rejection, doing everything from asking a stranger if he could borrow money to asking a fast food worker for a “burger refill.” By doing this, he became less sensitive to being told no and learned a valuable lesson. In his TedTalk, he explains, “I turned the rest of my 100 days of rejection into this playground— into this research project, I wanted to see what I could learn. And then I learned a lot of things. I discovered so many secrets. For example, I found if I just don’t run, if I got rejected, I could actually turn a No into a Yes, and the magic word is Why.”

By overcoming his fear of rejection, he learned to be resilient and ask more questions—often leading to a more successful outcome.

Failing is Part of Lifelong Learning

Great leaders place a high value on lifelong learning and development. As you set your goals for the coming year, consider putting “Succeed at Failing” at the top of your list. Within every setback is an opportunity to learn and grow.