The Number 1 Reason Your People Are Afraid Of Change

People fear change because they are afraid they are going to make a mistake and, as a result, get in trouble for it. Humans are creatures of habit and our brains are hardwired to avoid making mistakes. But making mistakes is an inherent part of transition and change.

There’s an engineering principle that understands that when there is movement there is error. When you’re driving on a straight road at 60 miles per hour, your hand is slightly adjusting back and forth to stay on that road. Even with the best-engineered vehicle and the best-engineered road, you have to make a course correction. The leader’s responsibility is to see an error as an opportunity to use as course correction data.

Change leadership creates an environment that mitigates the fear of change and instead creates a strategic advantage out of being flexible with change. It starts with expectations and is sustained by trust.

Leave room for mistakes when your team is working through change. You have to expect that mistakes are going to happen when things are in transition. Be the model to your team that mistakes are OK – even big ones. If you go into a fit when an employee makes a mistake, they are going to become less willing and able to cope with important changes in the business.

There’s going to be error whenever you go through change. Our job is to use that as data and feedback in the course correction process.

High-quality production is important, but don’t dwell on perfection. Balance the pursuit of quality with an equal emphasis on being able to manage error. Focus on cultivating what’s working and honor your people by positively gossiping about their performance, rather than dwelling on details and small imperfections.

Trust – and, ultimately, loyalty – is developed by taking the blame and placing praise. Despite this truth being stated and shared by the broad professional community for decades, this is still a concept that many managers find difficult to implement. As the leader, you are responsible for taking the heat when mistakes are made. 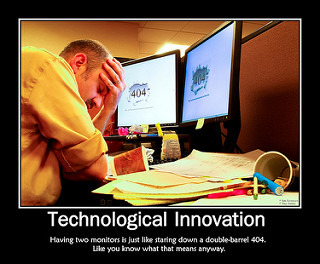 There is a great story from one client that came through our leadership training program several years ago now that pulls these elements together. This man was just starting out his professional career in IT, as a tech person. His second week on the job he took the entire network system down for the whole company. He’s working at his computer when all of a sudden — Whoa! He heard things coming out of other cubicles that were not constructive – and he knew at that moment he had made a big mistake.

He went directly to his boss and he said, I think I’ve made a big mistake. She, being an approachable manager, began to ask questions to collect information. Tell me what happened.

Now comes her boss – one of those loud, angry types – hollering down the hall. Into the office he storms, red-faced and yelling. The guy who made the mistake is sitting there watching his boss get yelled at for his mistake. He’s only been on the job 2 weeks, so he’s sitting there thinking I’m history. I’m fired for sure.

For 15 minutes he watched as his boss got yelled at for his mistake and not once did she even mention his name. She took the entire heat of that confrontation. Finally, the big cheese began to run out of steam and said, “This mistake should have never happened!” To which she replied, “It did and I take full responsibility for that. That’s my area of responsibility and every minute we’re spending here is time we’re not getting the system back up.”

And from that day forward, she had the hardest working most loyal employee in this guy. He did everything he could to not let her down, and to this day he still says she is the best boss he has ever worked for. And he certainly never made that mistake again!

When you’re inviting people to go through change, you’re still responsible. You don’t delegate that.